Author JA Andrews juggles time, family life, and aphantasia to write epic fantasy stories in her Keeper Chronicles world where peace-keeping storytellers fight magic with magic. The series includes A Threat of Shadows, book one (2nd edition, 2018) and Pursuit of Shadows, book two (2018), as well as the standalone novel A Keeper’s Tale: The Story of Tomkin and the Dragon (2016)—with more to come. You’ll find Janice on her website JAAndrews.com and on Facebook.

What sparked the initial story idea for A Threat of Shadows? Did you plan on the first book working into a series?
A Threat of Shadows was actually started in 2008 because my husband had to work out-of-town for a month, and he was bored to death. So I started writing him a scene of a story each day to give him something entertaining to read at night. The first ten-ish chapters of the final book came out of that time. Once he got home, the story was dropped and mostly ignored for the next half-dozen years. But I had developed such a fondness for the characters that I couldn’t quite forget it. After a few writing classes and discovering that indie publishing was becoming more viable and more interesting all the time, I decided to give it a try.

Wrangling those early chapters into the beginning of a novel was a lot of work, and I had a ton to learn about writing stories (I still do), but around 2014 I decided to give this writing thing a chance, and began the (incredibly slow) process of writing and learning and editing and rewriting and wailing in despair and editing again. I finally published it in 2016. As soon as I got into the book I knew I wanted a series about the Keepers.

What do you do to make your magic system logical and believable?
I have a degree in engineering, so to have the magic system be all about manipulating energy felt like a rational thing for me. It doesn’t all work perfectly—because it’s magic—but I get a bit hung up on magic systems that defy the existing laws of physics. Explaining this always makes me feel quite nerdy, and always leads people to ask why I don’t write sci-fi instead. But I think it’s the wonder of the magic that draws me to fantasy. Sci-fi feels too rational. I want a little whimsy in my magic. And some sparkle.

Tell us a little about your main characters and why readers will connect with them. Will those who know you recognize you in any of the characters?
My main characters are Keepers, a very small group of people (one is found about every 7-10 years) who can do magic but are mostly concerned with keeping the history and stories of the country. They’re more bookish than warrior-like. In fact they don’t usually have weapons, and they’re not that much help in a fight. Which is unfortunate as they keep being attacked by dragons. The Keepers are very dedicated to keeping peace in the country and are generally self-sacrificing and noble. In my first book, Keeper Alaric spends the book wrestling with the fact that in an effort to keep his wife from dying, he’s thrown away a lot of those ideals and went to dark places he’d never thought he could go. I do think people can probably see me in most of my characters. I think it’s hard to genuinely write characters if you can’t really sympathize with their desires and their struggles.

How did the first book in the series compare to the second as far as challenges go?
The second book in my series, Pursuit of Shadows, follows a different Keeper than the first, and I really underestimated how hard it would be to write a new character after writing Alaric from book one for almost a decade. The books do intertwine (and it’s a continuation of a larger story arc), but it was hard to learn to write with a new voice.

What does a typical writing session look like for you? Any writing rituals or must-haves to get you started or keep you going?
I have three kids (ages 7, 9, and 12), and I home-school them. So all my good writing happens early in the morning before anyone else is awake. I have a mini-Christmas tree lit up next to my desk, a cup of coffee, and brain.fm, which is music that’s magical and enhances focus. It’s the greatest thing ever.

Of the three books you’ve written, which one did you enjoy writing the most?
A Keeper’s Tale, without a doubt. It’s a short novel that is a standalone story. Unlike the other two books, which are the first two in a series and spend a lot of time focused on relationships and larger issues (like how we reconcile who we are with who we think we should be), A Keeper’s Tale is basically a romp of an adventure story. It was so much fun to write that it gave me the mistaken idea that all future books would be that easy. If you ask any of my critique partners who listened to my moaning for a year and a half of writing Pursuit of Shadows [written after A Keeper’s Tale], you’ll know that didn’t turn out to be true.

Where does A Keeper’s Tale: The Story of Tomkin and the Dragon fit into the world of The Keepers Chronicles? Do you have plans for more Keeper’s Tales?
The Keepers are storytellers, and the story of Tomkin and the dragon is a well-loved story in their world. It was mentioned more than once in my first book, and so I thought it would be fun to write it out, seeing as how even I didn’t know what the story was about. It turned out to be a really fun tale about a bookish young man who’s finally put in a place to be as heroic as he’s always wanted to be.

I do have plans for more! I wrote a short story called The Black Horn which is another of the Keeper’s stories. It’s published at the back of the expanded second edition of A Threat of Shadows. I have at least one more story that I have vaguely outlined which will probably be novella length and will relate to book three. And I’m sure I’ll have many more. They’re really fun to write, it’s just finding the time to do it! 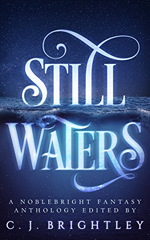 In an interview with Marc Secchia, you discuss the term “noblebright.” Why does your writing fit in this category? When you write, do you keep in mind that your children or grandchildren will someday read your stories?
Noblebright is a little tricky to describe, but it’s a term that stands opposite of grimdark, which is a bleaker, darker sort of fantasy. Noblebright doesn’t mean that the world is bright and cheery, or that the characters are all good and noble. To me the difference lies in the hope that characters can do something that will make a difference. For instance, if you take a series like Game of Thrones, the entire world is so dark and broken that no character, no matter how much they try, will have a significantly good impact on the world. In contrast, take Lord of the Rings, where a couple little hobbits can sacrifice a lot and manage to defeat a terrible evil. Or a shield maiden of Rohan can kill the king of the Nazgul. Not all of Middle Earth is as cheerful as the Shire, but there’s a hope there that good can prevail in a significant way. To me, that’s noblebright, and it’s definitely the feel in all my writing. I don’t want characters who don’t struggle, because I don’t see that as realistic. I want them to be urged on by the hope that even though it looks bleak, maybe they can bring something good to the world.

And I do keep in mind that my kids will read my books. They’re all excellent readers, and my twelve-year-old reads everything I write. I don’t want to write children’s books, but I want my books to be clean enough that younger readers can read them. At the same time, the books are written for adults and tackle more adult ideas like guilt and loss and loyalty.

Do you have a message or a theme that recurs in your writing?
I keep finding my characters dealing with who they are compared with who they think they should be. I suppose I should spend some time soul-searching why I keep writing that, lol.

What are the hardest kinds of scenes for you to write?
Descriptions of new places! I have very little visual imagination. When I imagine the story, it’s emotions and sounds and character interaction and dialogue all set in a hazy, vague setting. Unfortunately, most people want a little more setting than that, and when my characters reach a place that’s really important to the story, it takes blood, sweat, and tears (and a lot of editing) to get things right. When all else fails, I personify things. An approaching rainstorm becomes a storm giant striding across the land. Not because I am so very fancy that I thought of it right away, but because I worked on trying to actually describe it for an hour before giving up and slapping some personification on it.

What writing projects are you working on now?
I’m currently drafting the final book of the Keeper Chronicles, which I hope to publish next spring.